Upper Side West is an artistic entity in its own right, it is an oniroscopic musical, literary and cinematographic work created by San Damon.

Composed and written in 2013, this piece is the second movement of the Symphorapsodie Oniroscopiste which he presented in the form of marriages to 178 of his photographic works on the theme of New York and this in various planetariums in the world, of which the most known is that of Brussels, in January 2016. In May 2018, Amalia Avilan recorded Upper Side West as a single, which was released two months later.

The arrangements are haunting, strange and melancholy dark. To the music and text is added the image.

The text is a real literary and poetic success, Damon speaks of a disillusioned New York, which seems to empty of its inhabitants and which no longer exists. It is not possible to pinpoint the exact time, at least the story begins in autumn, the season that psychiatrists consider to be the beginning of the year's episodic mental depressions. He evokes Edgar Allan Poe and the murder of Lennon, both dead this season. The Jimbo is undoubtedly a kind of bum whose real name would be Jim Morrison.

At the beginning of the text, she gives the axis "Rosemarie" which is none other than Rosemarie Baby, the young woman who in Polanski's film gives birth to the devil. The text, music and film are full of subliminal messages. Damon overflows on the threshold of our unconsciousness by navigating between the things that still exist and those that no longer exist such as: "Black Stone Cigarette" well known in the Twenties in New York or currently a strange allusion to the Lalo Café located at 201 West 83rd Street, which is not quoted, but he speaks of the "Strawberry short cake" a speciality well known to the establishment.

It is a child's voice that begins the theme of the piece, but just before that one hears a raven, perhaps an allusion to Poe's text "the raven" or more certainly, coming from a San Damon who loves animals and is very melancholic, not to say lypémaniac, and whose emotional dictates are felt in many of his works, taking his representation, in the good sense of the term, of the death that hovers over the city, New York serving there only as an alibi.

Then an airplane passes like on landing. Is it a metaphor from Damon to evoke the passage from Poe's century to ours through the real bird in Poe's time and the "metal bird" plane in ours? Still, the childish voice could also tell us about Virginia Clemm, Poe's child-woman, quoted in the text, or about a lullaby that nostalgically rocks a world that no longer exists. In the station wagon, there are background voices and playground cries, a reference to his own text: "And Riverside Park is empty...The cries of River Run Playground are dead."

Analysis of the film

Amalia Avilan walks in the forest, she meets a young girl, who would represent death, an exchange of bag (blood red), with a revolver ready to use, occurs between them.

We go through phases of melancholy, joy and despair. His character seems to split at a moment, when all of a sudden, we plunge back into a New York invaded by plants, his voice leaves in a virtuosity that give shivers and emotions. Suicide is inevitable, but if you see her with a revolver in her hand, it's especially the last images of the film that take your breath away, when the train at full speed grazes her.

All dramaturgy brings out music, text and interpretation. The film comes out of what we usually see, either in popular music or in classical music.

Subliminal or almost subliminal images tell a counter story to the one we think we are witnessing and rumour has it that this is why San Damon, without him ever having confirmed it, in an interview given on this subject in 2014, entitled its title: Upper Side West and not Upper West Side, as it should be.

The picture of the cover of the single is necessarily from San Damon. There's a wink to his buddy Clice Madon for his information. At the 228th time the ochre ball was raised and before these new hours began. 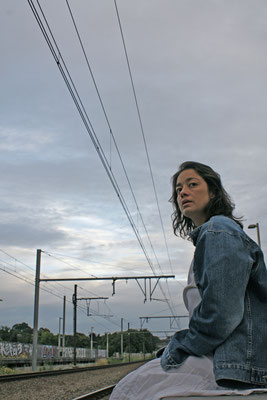 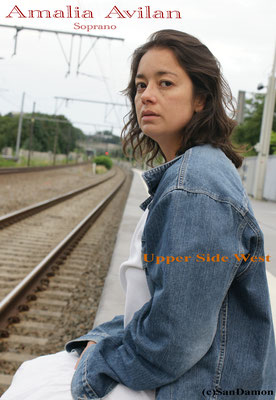 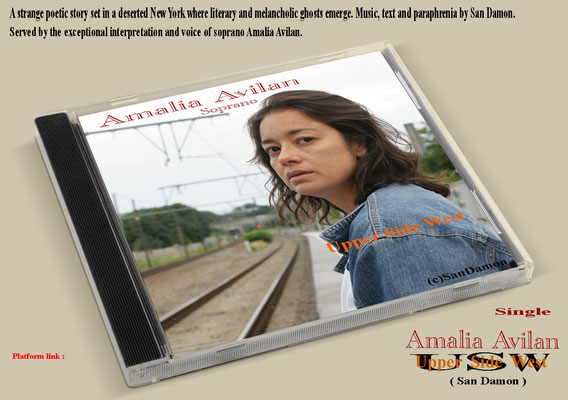